July 26, 2010
These are really old, from when I was doing my Masters; one of them is actually dated, 6 June 2004. I was really into spinosaurs back then and I would spend some evenings drawing spinosaurs. One particular evening, instead of drawing life restorations or skull reconstructions, I had decided to draw all the known fossil materials - well, whatever figured material I could find at that time. 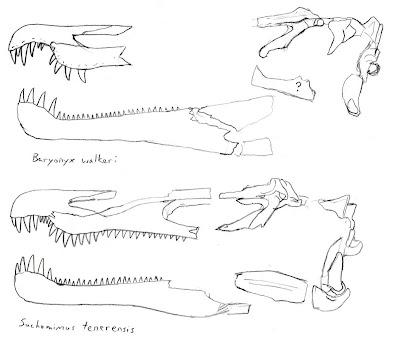 The above are my drawings of the preserved cranial and mandibular elements of Baryonyx walkeri and Suchomimus tenerensis that I could see from published figures. I based Baryonyx on a figure in Charig & Milner's chapter in the book Dinosaur Systematics: Approaches and Perspectives (Carpenter & Currie, eds) rather than the description, so the identification of the bones are according to that chapter. By that time I had already had a chance to observe the real Baryonyx material at the NHM, the "jugal" of which is accompanied by an updated label identifying it as an angular.  So even though it is shown in the position of the jugal here (as it was in Charig & Milner, 1990), I marked it as "?".  [Oops...I just realised I made a mistake...Charig & Milner (1990) actually figure this bone as a surangular, so this drawing is obviously not based on their figure...] Suchomimus here is basically just a copy of the figure in Sereno et al. (1998), but I did have to kind of make up to what extent each bone is preserved because Sereno et al. (1998) only figured the cranial and mandibular elements as part of a reconstruction. That's the drawback of Science or Nature papers; they are limited in space for detailed descriptions. And till this day I haven't had the chance to examine the real materials of Suchomimus, although I did have a chance to compare the cast replica of the premax-maxillary complex at the NHM to that of Baryonyx. I've never really appreciated the size difference until that moment; despite the similar morphology (some people even say they are congeneric) Suchomimus is indeed larger. 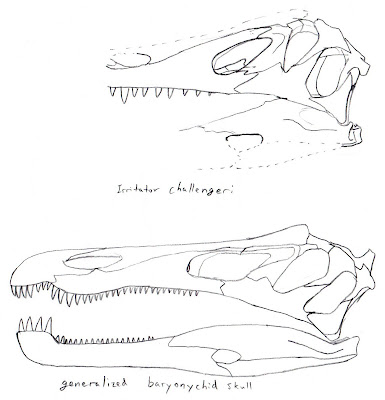 Now onto this next drawing. As evident from the caption, the top is the partial (but well preserved) skull of Irritator challengeri. I really like how the species name is a homage to Professor Challenger from Arthur Conan Doyle's The Lost World; I suppose one of the earliest depictions of a palaeontologist (or maybe a generic all-round scientist) in popular fiction. As an aside, it is well known that Professor Challenger was in fact Doyle's favourite character instead of Sherlock Holmes. The genus name Irritator is from 'irritation, the feelings the authors felt (understated here) when discovering that the snout had been artificially elongated' (p.5, Martill et al., 1996). Irritator has by far the most complete postorbital region of any spinosaur.
Which leads me to the second drawing above; a direct copy of the 'generalised baryonychid' from Rauhut (2003). Unlike the very famous and widely popularised image of Sereno et al. (1998), Rauhut's skull reconstruction of a 'baryonychid' (Baryonyx + Suchomimus) has the postorbital region based primarily on Irritator. Rauhut regarded the status of Spinosaurus aegyptiacus ambiguous and cautioned the use of Spinosauridae and instead preferred to use Baryonychidae. Dal Sasso et al. (2005) however regard Spinosaurus aegyptiacus as a valid genus and use the family name Spinosauridae instead of Baryonychidae. 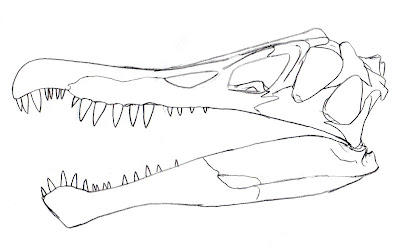 This last drawing is my skull reconstruction of Spinosaurus ('04 version) - pre Dal Sasso et al. (2005). I can't remember how much of it is my original interpretation and how much of it is ripped off of someone else's work. But it is obvious that I was heavily influenced by an article by Berislav Krzic in the now out of press Japanese dinosaur magazine Dino Press. This is most evident in my depiction of the external nares and the antorbital fenestra; they are similar to those depicted in Krzic's illustration.  Of course this reconstruction of the antorbital fenestra is probably not correct in light of more recent evidence. The postorbital region looks like I just took Irritator and changed the proportions a bit...so ends up with a more gracile looking Spinosaurus than that reconstructed recently.

I don't think any of my other old dinosaur drawings are good enough to be featured on the web, lest I humiliate myself ;)  So my next post will be on another old drawing that I thought was kind of funny but it won't be a dinosaur nor will it be anything palaeo, I'm afraid.  But should be fun nonetheless...

Dal Sasso, C., et al., 2005. New information on the skull of the enigmatic theropod Spinosaurus, with remarks on its size and affinities. Journal of Vertebrate Paleontology 25: 888-896.

Christophe Hendrickx said…
Very nice, Manabu. Didn't know you were interested in spinosaurids when you were in Bristol. (It's a shame, we would have had many conversation on those animals two years ago!). I would be very happy to display your drawings on my website. Would you agree to send them to me in high resolution format?