November 16, 2010
I was flipping through an old sketch book yesterday (only because I was looking for spare large-sized sketch paper for some possible figures in preparation for a manuscript I'm currently working on) and I came across a few old dinosaur drawings that I had completely forgotten about. I present one here. 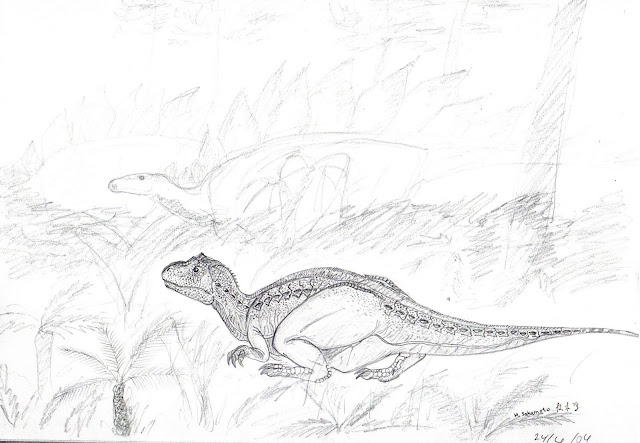 It's an Allosaurus squatting behind some foliage waiting for the right moment to burst out to attack the group of Stegosaurus. It's even inching forward little by little to get to the perfect position. I wouldn't be surprised if Allosaurus was an ambush predator; lying in wait till the right time to attack, then sprinting up to its prey and delivering a slashing bite to inflict serious wounds to its prey.

With it's relatively small teeth, Allosaurus doesn't fit the bill for an average theropod (even though it is frequently cited as being the quintessential theropod). However, Allosaurus had an incredible gape and very strong neck muscles. So Bakker (1998) suggested 'that the entire upper jaw of allosaurs functioned as one huge, saw-edged Samoan war club, with each small, individual tooth acting as a mega-serration' (Pp. 152-154, Bakker, 1998). Rayfield et al. (2001) independently arrived at a similar suggestion, based on the relatively weak muscle-driven bite force compared to it's extremely strong skull, that 'Allosaurus generally used a high velocity impact of the skull into its prey; an analogue would be a person wielding a large, heavy hatchet' (p. 1035, Rayfield et al., 2001). While disagreeing with the war club/hatchet analogue, Anton et al. (2003) also agreed that Allosaurus probably drove its small teeth into the flesh of its prey using the strong neck muscles, much in the same fashion that has been suggested for sabre-tooth cats (Akersten, 1985).

It's a bit of an old drawing and my skills aren't that great (maybe not that great even now...) but you can tell that I'm trying to play with a bit of perspective, in that the Allosaurus isn't exactly drawn from profile but at a bit of an angle; the head's supposed to be facing away from the viewer just slightly (note the slightly squished kind of look of the skull - I'm trying to get a perspective here, I think). Otherwise, maybe it's a young allosaur and it's got a bit of a short face...

I think I was also trying something with the scaly look along the back and tail but kind of failed with the hip region. But the skin texture around the face is definitely influenced by Greg Paul's illustrations in his Predatory Dinosaurs of the World.

A bit of anatomical inaccuracy, I guess, is the way the hand's being held.