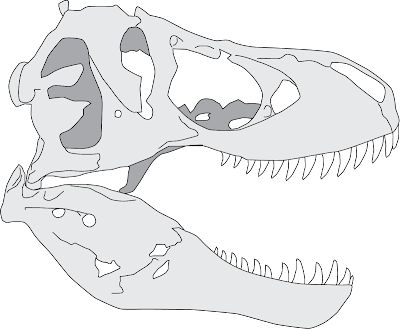 A while ago, I created some line drawings of several theropods for a talk I was giving. One of those drawings was a Tyrannosaurus rex based on Stan, BHI-3033. It's a simple drawing so I haven't bothered with drawing out all the individual bones, but what I did do was to push the teeth into the sockets so that only the crowns are exposed. It's evident that a lot of the teeth have shot out of the sockets after the animal had died so that much of the roots are exposed. Presumably, this version should be closer to what the tooth row would have been like in life; I don't suppose roots would be exposed too much in life... The result is rather stunning in that the teeth are not as long as you typically see in T. rex skull restorations. And of course, the tips of the teeth form a more uniform and even biting surface. Perhaps I pushed them in too much and maybe the teeth were poking out a bit more, but it shows how much of a difference it makes.

Unknown said…
Nice. Did you basically trace over a photograph in Illustrator?
07 October, 2011 01:12