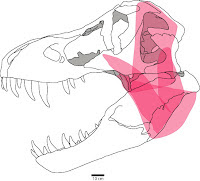 So this is yet another one of my reconstructions, but this time, it's on jaw muscles, yeah!
The skull is redrawn from a photo I took of Stan the T. rex displayed at the Oxford Univesity Museum of Natural History. It's just a cast replica, but the quality is amazing. You can actually determine muscle scars on the surface!
So I've simply reconstructed four major groups of jaw adductor muscles; the Musculus adductor mandibulae externus (MAME), the M. adductor posterior (MAMP), M. pterygoideus anterior (MPTA), and M. pterygoideus posterior (MPTP). I included the M. pseudotemporalis as part of the MAME just for simplicity.
Muscle attachement areas were determined (pretty roughly) from visible muscle scarrings on the casts, cross-referenced with muscle attachments of modern birds and alligator (through dissections).
It's pretty interesting how, even though details differ, that all reptiles possess the same five major adductor groups. The homology is confirmed, so I'm happy to extend my comparisons to non-archosaurs, especially Sphenodon for its similarity in cranial geometry to theropods.