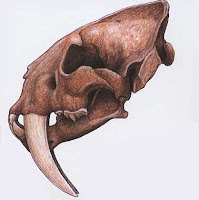 Biomechanically, Smilodon fatalis is an interesting animal. Where most extant felids have big strong canines, S. fatalis had long flat ones.

This implies that Smilodon would not have been capable of the same kind of precision biting that modern cats employ. Struggling with prey to deliver a fatal bite to the nape of the neck and dislocating the cervical vertebrae would result in the canines contacting with bone. The long flattened canines of Smilodon probably would not have withstood that kind of load.

To the left is a tiger skull for comparison. The tiger has a lower longer face, larger eyes, and above all has pronounced zygomatic arches. Smilodon on the other hand had smaller zygomatic arches. This reduced the amount of available space for the temporalis muscle thus reducing the overall muscle force.

These anatomical features would imply that Smilodon did not have a strong bite compared with modern cats of similar size.

Perhaps, this is a byproduct of having extremely long canines. In order for Smilodon to clear its lower jaw of the canines, it would have needed a large gape. Large gape results in an increased stretch of jaw muscles. This reduces tensile stresses in muscles thus less effective force. For this, Smilodon perhaps had to rely on another way of driving its canines into its prey.

Akersten (1985) hypothesised that rather than relying solely on a jaw-driven bite, Smilodon would have used the cervical musculature to push down the whole head and drive the sabre-teeth into the prey. Instead of biting into the neck, Smilodon may have bitten into the soft abdominal region, drove its canines in deep, then sliced out a chunk of flesh. This leaves a gaping wound and the prey would go into shock and die from loss of blood.

Laelaps said…
Interesting stuff; I'm quite curious myself as to exactly how these cats used their teeth and jaws. I also have to wonder about the possible role of sexual selection in the lengthening of teeth over time; while the cats would still have to retain the ability to bite and tear prey, I can't help but wonder what role mate selection might have had in relation to "saber" size.
26 June, 2007 17:27

Zach said…
Could saber-teeth have a social display function, like baboons today? In this sense, saber-teeth could just be the feline answer to antlers. Sexual selection has an enormous impact on body shape. Look at ceratopsians--their entire head, and thus their immobile neck and drop to all fours, was the result of sexual selection on horn and frill length (and complexity).
29 June, 2007 23:31

Raptor's Nest (old) said…
That's a very interesting thought. It could be possible as sexual selection is a very strong selective pressure.
30 June, 2007 17:10

Raptor's Nest (old) said…
I was at the ICVM8 in Paris where Blair van Valkengurgh delivered a talk on the cranial morphological differences in cat skulls and sabre-tooths. Apparently, Smilodon and kins have an extreme condition where the rostrum is upturned. She suspected that sabre-tooths probably were fast killers. I'd imagine this would be a devastating bite to the throat quickly slicing through the trachea...which modern cats tend to take time in doing - apparently, they more or less don't puncture the skin and only suffocate their prey.
25 July, 2007 14:27

Unknown said…
I would not rule out the possibility of sexual selection for canine size. However, then you would expect a big difference in canine size between males and females but this has never been found. Extant lions do differ between sexes regarding canine size, but sexual selection is not the driving force. I believe it is for territory purposes.

I have done research on sabertooths and bite force.

Unknown said…
I wonder if the Smilodon used a combination of it's teeth as a stabbing action combined with the neck muscles to create a rip/tear motion similar to the action of old-fashioned tin openers.

this would devestate any prey, who would suffer trauma and go into shock quite quickly. Contrast this with lions and tigers which use the throat hold to suffocate prey and therefore also hunt in packs.

My understanding is that Smilodon would have had to be an ambush type of hunter and therefore more likely to be solitary or in pairs.

Also as has been discussed here they teeth could have been entirely for sexual attraction and were used to display by males to subdue one another and so gain the sexual favour of the female/s.