On stormtrooper pauldrons from Star Wars 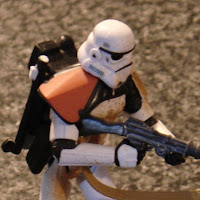 I am going to veer off from my usual (but infrequent) blog posts on palaeontology and blog about another geeky subject.
Star Wars.
I've been a big fan of Star Wars ever since I was a little boy - Return of the Jedi must be the first film I remember seeing at the cinema; my dad took me to see it when I was three but all I remember was being freaked out by Jabba the Hutt and I went through the rest of the film asleep as a sort of a defensive mechanism.
When I was a teenager, I read Kevin J. Anderson's "Jedi Academy Trilogy" then went on to read Timothy Zhan's "Thrawn Trilogy", and from there, I pretty much read every single Star Wars related novel - until I got bored after the story arc reached a time period around 20-25 years since the events of Return of the Jedi (by this point I thought it became pointless to continue reading...).
Anyway, there is one thing that has been bugging me since I was a teenager: when reading through Star Wars materials, I frequently came across passages about stormtrooper commanders being distinguished from normal troopers by wearing shoulder pauldrons (see photo of sandtrooper with orange pauldron), but you never ever saw stormtrooper commanders wearing pauldrons in any of the original three films. Granted, the commanding officer of the sandtrooper unit in Star Wars: A New Hope was wearing a pauldron (see above photo), but all sandtroopers in that sequence were wearing pauldrons, every single one of them. The only distinguishing thing about the commander was that he was wearing an orange pauldron while most troopers were wearing black, but then again, you can see at least one more stormtrooper wearing orange as well. And then there's the one wearing white, which apparently is supposed to be a sergent...
So where did this come from? What is the original source? - I have no idea...
In Revenge of the Sith some clone commanders do wear what look like pauldrons, but a lot of other Clone Wars materials seem to indicate that a pauldron is more of a garment of a distinguished clone officer rather than that of rank (e.g. ARC troopers, or Captain Rex who wears a pauldron as opposed to the more senior Commander Cody who does not). So clearly, pauldrons only have a loose relationship with rank. Of course, one can argue that sandtroopers have clear rank designations by the colour of their pauldron but as I've mentioned above, there are more than one trooper with an orange pauldron and at least two with white; it's not like the colours reflect frequencies that you'd expect from rank, so I think the colouring variation is more to do with cinematography than anything. 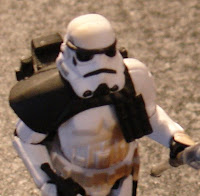 The reason why this issue has bugged me is because there are widely held interpretations of on-screen material (such as the role of a pauldron) that was only subsequently given by someone (mostly sci-fi authors) and somehow became "canon". My issue with this is that despite these novels, comics, games, whatever, being licensed by LucasFilm or LucasArts (or by whomever the rights are held), they are only glorified fan-fiction, as far as I can see. So I don't see any difference from these widely accepted interpretations from my never-ending imaginations. I don't especially see why I have to believe something that is not even reflected on-screen; such as the pauldron as a designation of rank in non-sandtrooper stormtroopers (we don't see any evidence for this in the films). Of course, it's fun to imagine specialised stormtrooper armour, equipment, etc, but we should bare in mind that even published materials are just fan-fiction in the end.

traumador said…
in good news the on-screen material as of eps 1-3 conflicts with its self now too...

sadly lucas' disregrad and contempt for my childhood memories has kind of crushed my love of the wars universe.

Anonymous said…
Sandtroopers are very cool!
About the colors:
"Sandtroopers wear colored pauldrons as a designation of rank. A stormtrooper sergeant's pauldron is white while an enlisted stormtrooper's pauldron is all black. Squad leaders, who lead units of seven troopers, wear orange shoulder pauldrons."
From StarWars.com

For the Clone Wars, the question is more complex and confused. Exist various interpretation of the clones armors...
21 October, 2009 23:01

Raptor's Nest (old) said…
>Traumador
I do sympathise with your distaste for what happened with the prequels - though I do like Revenge of the Sith, mostly for the clones and the Emperor...

Raptor's Nest (old) said…
What I meant to say is: regardless of what official star wars entries may read, were colours intended to represent rank when they filmed those sandtrooper scenes? It may just be that someone came up with a convenient explanation and it somehow got incorporated into the "official" interpretation later.
22 October, 2009 10:31