September 05, 2010
I have been meaning to write about this for the longest time, but things kept getting in my way.  Now, I have the perfect opportunity, as Paolo at Zygoma has coordinated with me to write a post on this very topic.  When Paolo was at the Bristol City Museum, I used to go bother him a lot, and together we'd go through their extensive cat skull collection.  One day, we came across a very interesting tiger skull specimen.  The box kind of said it all; it was labelled 'TIGER' on one end and 'MAN-EATER' on the other.  So we excitedly opened the box and found an isolated skull with no mandible but with a handwritten label.  The label read: 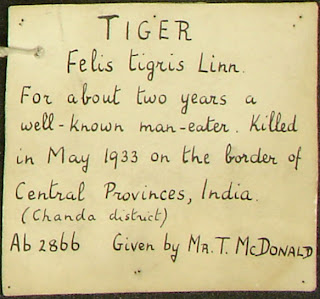 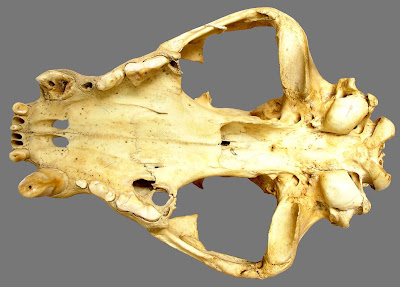 The canines even look like they could have broken and were subsequently worn down from continued use.  With its teeth so worn down this tiger must have found hunting large game difficult, so it resorted to hunting easy prey, i.e. humans. It's a pretty neat specimen, and we admired it for a while, but after our initial excitement wore down, we moved on to other specimens.

However, this specimen was yet to give us all its surprises. After I had gone through quite a few of the cat skull boxes, I came across a number of isolated mandibles; some lion, but others tiger.  I noted that the specimen numbers on these mandibles matched those of isolated skull materials that I had previously measured so I got pretty excited.  What's more, I found the mandibles to the 'man-eater' tiger skull: 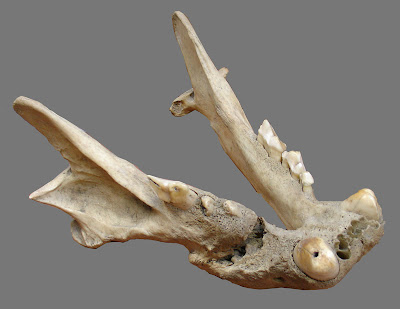 As you can see, it is totally messed up (yes, that is the technical term).  This tiger had fractured its right mandible and survived long enough (at least two years judging from the label) for it to heal. However, obviously the bones had not set right and so this tiger probably couldn't bite properly. Combined with the worn-down canines it must have made hunting extremely difficult.

A further shock is how the teeth occlude. 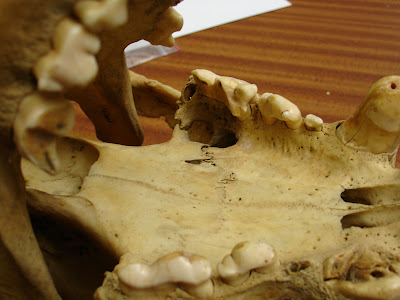 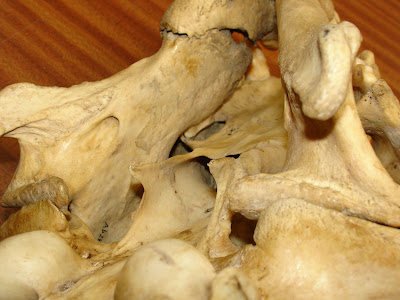 A keen observer may have noticed an odd hole in the palate of the ventral view photo above, but I had completely missed that when I saw the isolated skull specimen and I had not noticed it until I found the mandible. It turns out the hole was caused by the lower molar biting into the palate.  It looks almost as if the bones in the palate gave way over a period of time, so this tiger was probably biting and chewing at a regular interval for quite some time after the fracture had healed. Although I am not a pathologist so I don't know for sure that's what happened...

Aside from the obvious job satisfaction of studying specimens in museum collections, the occasional specimen like this 'man-eater' makes it that much fun to work with historical museum collections.  Most of the cat specimens in the Bristol Museum are trophy specimens but some have unique histories.  There are a couple of more specimens from the Bristol Museum that are quite interesting so I may post something about them in the future.

Thanks to Rhian Rowson of the Natural History Collection at the Bristol Museum for encouraging me to write this post.

And last but not the least, be sure to check out Paolo's post for more man-eater tiger specimens: http://paolov.wordpress.com/2010/09/05/maneaters/

Nick said…
I would expect this is worth a short communications paper, no?

Oh a shame - it is one of my favourite specimens of all times!