May 03, 2011
Finally, I have completed my Pachyrhinosaurus! I started it around October of 2008, but with the subsequent job hunt and pushing papers out I hardly had time to make progress with it, and it ended up taking more than two years.

Anyway, here it is. 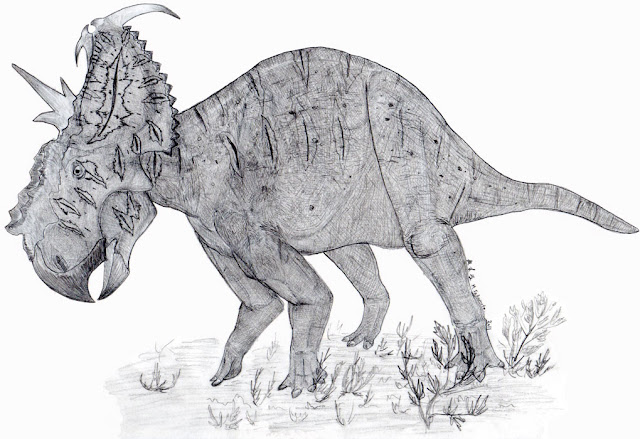 This is mostly done by referencing some photos given to me by Traumador Tyrannosaur... well, mostly the skull that is; the body is a generic ceratopsian. My fiancée asked me "why do you keep drawing the same dinosaur?" to which I replied "...but they all have different horns". I'm not sure I convinced her but that's essentially centrosaurs in a nutshell; very diverse cranial morphology in an otherwise conservative body plan. I even read somewhere that Greg Paul lumped all centrosaurs into the genus Centrosaurus in his newest book The Princeton Field Guide to Dinosaurs (but I haven't read it yet).

When I draw dinosaurs, I usually just draw rough outlines of the animal with very limited skeletal reconstructions (but I do draw the skull), and I completely draw over the rough sketch to flesh out the creature on the same paper. I just draw on inspiration and mental imagery (while referencing skeletals to get the proportions about right), so I don't draw proper skeletals (as seemingly most palaeoartists do as I found out about two years ago). But this time, I actually drew a skeletal (but very rough) and used a tracing paper to flesh out the creature on a separate layer. I was initially planning on drawing successive layers of muscles and skin and whatnot but I got extremely lazy and ended up drawing just one layer of life restoration. For reference, the following is my rough skeletal: 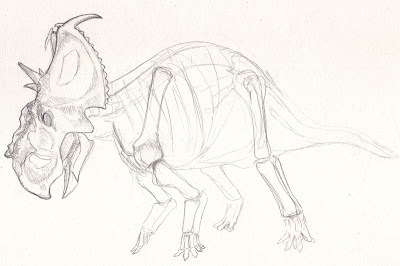 As you can see, it is really a rough skeletal.

Back to the finished drawing. I thought it would be kind of neat to have some patterns, but my fiancée didn't like it, saying they look like scars. Anyway, I kept the patterns mostly to the face and a big one on the frill since I thought that's probably where ceratopsians would mostly want colours and shocking patterns; to intimidate male competitors and woo the ladies! So the patterns along the body kind of fade out towards the tail.

Thinking back, I've been drawing mostly centrosaurs when it comes to ceratopsians so maybe I should tackle a chasmosaurine for my next ceratopsian. Or I might try out a hadrosaur as a late entry to the Art Evolved thing. Or maybe I'll just get back to my non-avian and avian theropods...