April 25, 2011
Today, I bring you the third instalment of my perching dino/bird series...my orange Microraptor. 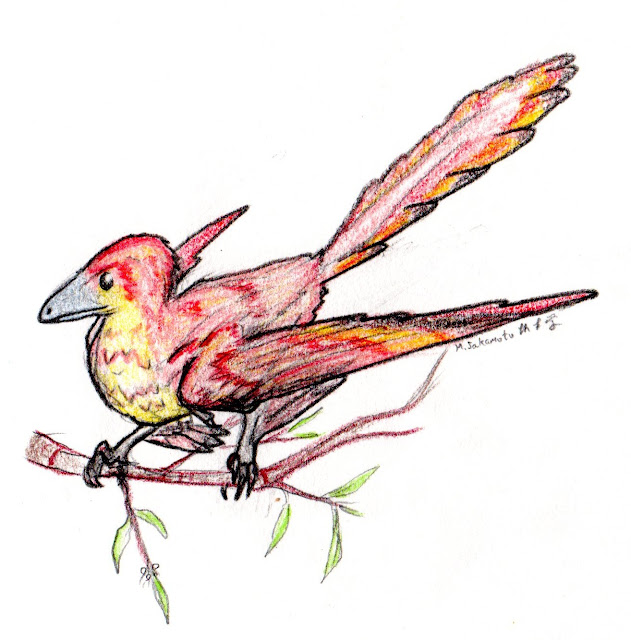 I was originally trying to draw Archaeopteryx but realised halfway through that the face was too theropod-looking and decided that I was going to convert it into a Microraptor. Actually, this one is even drawn before my blue Archaeopteryx, so I'm posting things counter-chronologically. But that's not strictly true because I only coloured this sketch in today, so it is technically my newest drawing.

I tried to pose this Microraptor with a half-folded wing; kind of like a bird folding up its wings after either landing on the branch or just extending them out for whatever reason birds extend their wings from time to time. Aside from the obviously interesting point of having tarsal "flight" feathers, Microraptor also is quite interesting in that it has really long primary feathers on the wings proper.

Colouring is as suggested to me by my fiancée, who apparently doesn't like my blue Archaeopteryx, but this one is approved. I used WHSmith colour pencils again. I don't know if anyone will find this amusing as I do, but having lost the original packaging, I keep these colour pencils in a Ziploc bag...

Peter Bond said…
I absolutely love the colourscheme for this cute guy! It would be great to see this 'archeopteryx and friends'
series on ART Evolved - how many do you have?
25 April, 2011 21:32

Raptor's Nest said…
Thanks! That sounds exciting. I have three so far (the three I posted) plus another Archaeopteryx I'm working on. I also have a lot of Confuciusornis rough sketches lying about; I'm considering making one of them into a postworthy piece...
26 April, 2011 21:34