April 19, 2011
After a very prolonged hiatus in palaeoart, today I bring you Archaeopteryx, the 'first' bird. I've recently been drawing various interpretations of fossil birds, primarily Archaeopteryx and Confuciusornis, but this rendering is one of my favourites so far. 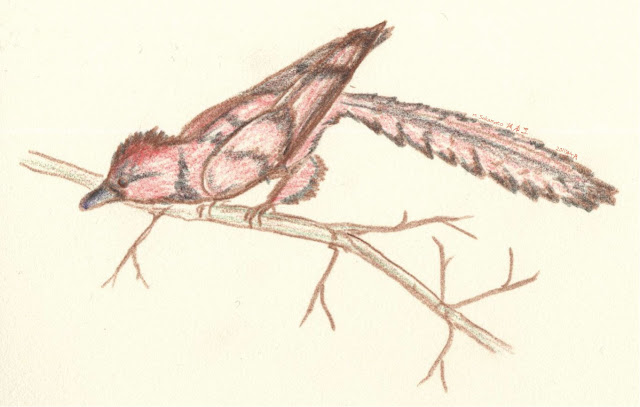 A red Archaeopteryx perched on a branch.

I've come to notice that Archaeopteryx is most frequently reconstructed with very short feathers along the head and neck. Indeed in the Berlin specimen, there seems to be a general lack of long feathers around the head and neck other than faint striations (Christiansen & Bonde, 2004). Christiansen & Bonde (2004) offer two hypotheses regarding the preservation of contour feathers in Archaeopteryx: 1, the fossil is an accurate representation of plumage in life; and 2, feathers were present but lost during fossilisation. The authors seem to prefer hypothesis 1 and suggest that Archaeopteryx had mixed coverings of large pennaceous feathers and short simple proto-feathers but even regions without feathers (apteria).

I haven't seen any Archaeopteryx specimens other than a couple of really good cast replicas, but I think it is entirely possible that Archaeopteryx actually had more feathers around its head and neck, and that it is just not preserved very well in the fossils. The degree of feather preservation in other feathered dinosaurs and early birds seems to be quite variable, so preservation could be a reasonable explanation. Some exceptionally preserved specimens do offer insights into the head and neck of these fossil creatures. For instance, the "fuzzy raptor" specimen of Sinornithosaurus seems to have some fuzziness about its head with longer feathery integuments, while Anchiornis seems to have a crest or a tuft on its head. Confuciusornis specimens also seem to be associated at times with feathers around its head and neck. Further, I personally think that feathers in preflight maniraptorans functioned primarily as display items, so it wouldn't be all that surprising if the head and neck were also covered in long feathers, instead of short proto-feathers like that of Sinosauropteryx.

When it comes to palaeoart I think there is a lot of room for creativity. Amidst all the recent ramblings and discussion on good/reliable palaeoart and whether or not skeletal reconstructions should be art or science, I opt for art. Now, there are two meanings to the word "art". One is "art" as in "creativity" (like the head and neck feathers in my Archaeopteryx above), while the other is "art" as in "artform" or "craftsmanship". Palaeoart I think can either be one or both forms of "art". Palaeoart has room for creative art because there is still a lot that is unknown from the available evidence; for instance body plumage in fossil birds and maniraptorans or just simply colour of dinosaur skin. On the other hand, palaeoart can be an "artform" or a "craftsmanship" because life restoration relies a lot on experience. An experienced palaeoartist/morphologist may be able to "see" muscles bulging over bones because he/she'd seen enough dissections to just simply visualise how big a muscle should be in relation to a bone. But I think this is more an artform or craftsmanship than hard science because each experienced palaeoartist/morphologist would visualise life restorations in their own various ways. For reconstructions to be purely scientific we'd need to have some numerical/statistical model (like some form of linear/nonlinear regression) that would predict the size, orientation, location, colour, etc of each soft tissue (e.g. muscles, feathers) based on some osteological predictor variable(s).

Raptor's Nest said…
By the way, I sketched and coloured this using TOMBOW COLOR PENCILS (12 color set), a very cheap standard colouring pencil set for Japanese kids. Pretty much every kid in Japan has owned a set or if not have used one.
19 April, 2011 16:43